My journey to becoming a Computational Archaeologist
Leave a comment

Posted by kristina.georgieva on January 6, 2020 in Interesting Articles, My Archaeological Experiences

I spent my last vacation in Malta with my mom and husband. During our trip we explored various areas of the island, and were treated to archaeological sites ranging all the way back to 3500BC. This post summarises some of the computational archaeology that I read about along the way. 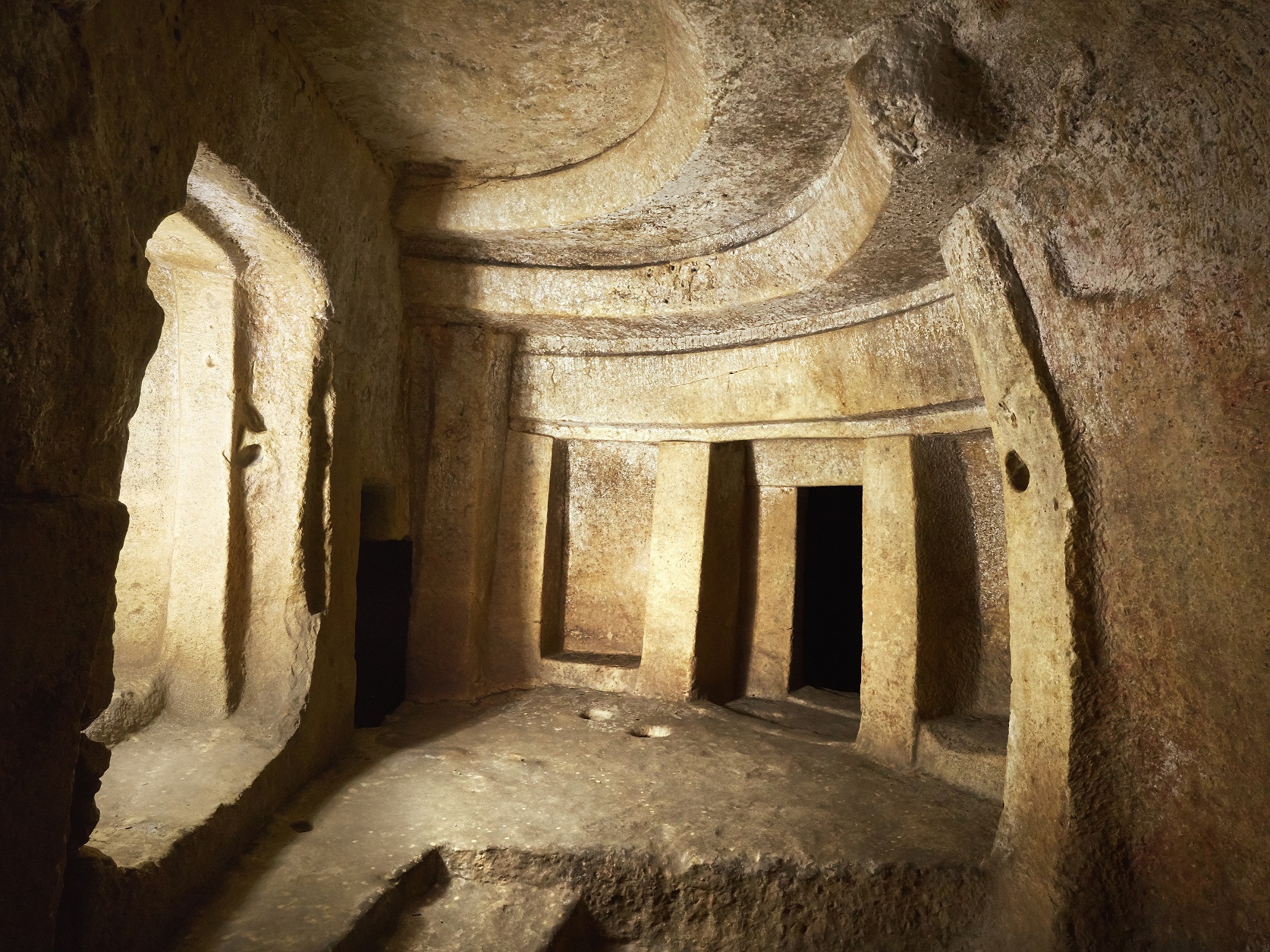 All in all, the archaeologists in Malta have been quite busy mapping, modelling and preserving the various sites that are on the island, as well as underwater in their vicinity. There is a plethora of different types of archaeological sites within the island, ranging from neolithic structures and roman sites to world war shipwreck. This makes it a very interesting place for archaeological research.

Posted by kristina.georgieva on November 9, 2019 in General Information

Yes, it’s been more than a year since my last post. It’s time to get this blog going again! I am sorry for my absence.

I’ve been following the Artificial Intelligence, Machine Learning and Deep Learning in Archaeology Conference that took place in Rome remotely via Twitter. I had to do it remotely as I only found out about it when it had already started. This post aims to bring visibility to the conference in order for people like me to get an understanding of what kinds of work were presented ( and to not to miss it next time 🙂 ).

The conference was organised by the British School at Rome and the European Space Agency and took place in Rome (<3) on the 7th and 8th of November 2019. You can check out some details on the ticket site and their website.

For more information you can check out the abstracts here.

You can also check out Tweets from @peterbcampbell and @DamienHuffer for updates on the day. Here are some highlights on the wide range of themes:

Remember Electric Archaeology (the blog mentioned here before + the lecturer of one of the courses also mentioned here)? Shawn’s research partner Damien was presenting their research at the conference 🙂

Speaking of Shawn, they are excited about archaeology in space too 😀

It wouldn’t be complete without some shipwrecks 😀

Started following this blog because of some 3D scanning articles? Fear not, there was some cool stuff around 3D models too

And for those that have been reading this blog for a while, Juan Barcelo, the writer of the computational intelligence in archaeology book, was there too 🙂

Yessssss, LIDAR data for the identification of Mayan structures ❤ remember those cool articles about how LIDAR lets you see through the vegetation?

And for the NLP fans, now you can reconstruct fragmented texts, who knows what interesting texts you can find now.

Posted by kristina.georgieva on May 21, 2018 in Interesting Articles, My Archaeological Experiences

Recently I did a 2 week trip with a friend to Israel, Jordan and Egypt. During this trip we saw a lot of amazing archaeological sites, which will eventually feature on this blog. Today I want to focus on Petra, Jordan.

Petra is a UNESCO Heritage site in southern Jordan, which has made the list of the new 7 Wonders of the world. Previously known as Raqmu, Petra was a city built during the Nabataean Kingdom as a trading hub. Many of the structures in the city (including the tombs) have been carved into the face of the colourful rocks found in the area.

A photo of the Monastery from our tea drinking spot

I have previously mentioned the Zamani Project , which does 3D models of archaeological sites (mainly focusing on African sites). They have created 3D models of various buildings in the Petra complex, which can be found on their website. The models were done by performing a laser scanning survey, for which the documentation can be found here. The models available include:

Videos can also be found on Youtube, such as:

There are also some articles and sites mentioning the use of satellite imaging:

You can also find a lot of information about the site on this website. The site includes information about each of the buildings, the events taking place as well as a live stream of the site (which I find a bit creepy considering that I never saw a sign at the place stating that you are being broadcasted to the world). The buildings and natural sites described include:

Course: Recovering the Humankind’s Past and Saving the Universal Heritage

Posted by kristina.georgieva on January 21, 2018 in Interesting Articles, My Archaeological Experiences

“Recovering the Humankind’s Past and Saving the Universal Heritage” is a Coursera course that will teach you an overview of archaeology and focus on the digitalization of cultural heritage using ICT (information and communication technologies). The course is organised by the Sapienza University of Rome and starts tomorrow (22nd January 2018).

Read up more about the course and sign up here.

See you in the virtual class! 🙂

Posted by kristina.georgieva on January 19, 2018 in My Archaeological Experiences

This holiday I had the chance to finally visit Athens and it was beautiful. We had great weather considering it is January. As is tradition this lead to some research on how the various sites that we saw have been digitised.

The city is covered in ruins. We stayed in the area of Monastiraki, very close to Hadrian’s library and with a wonderful view of the Acropolis 5 steps from the entrance of the hotel. We were there for four days around new years so, unfortunately, some of the museums that we wanted to visit were closed (like the museum of the ancient Agora). We also got a chance to visit the island of Aegina for a day.

I personally didn’t see any references to computational archaeology this time. However, work in the area has deffinitely been done, as you will see in the following links, with some of my holiday photos sprinkled around:

Odeon at the Acropolis

Pantheon at the Acropolis

In addition to the above sites we also visited the following interesting sites for which I couldn’t find  a dgital project:

Lastly, for the pottery enthusiasts: The hill of Paleachora is covered in surface pottery pieces. If you enjoy spotting these it is a nice place to do it. Here is a picture my favourite find (Plese remember to leave them where you found them if you visit!):

Posted by kristina.georgieva on August 27, 2017 in General Information, My Archaeological Experiences

I just came back from a nice 2 week holiday in Italy, where I was spoiled with archaeology, art and sun (the latter not often seen in Berlin). We visited Napoli, Pompeii, Amalfi, Roma, Siena, Florence, Chianti and Pisa. Somewhere in between waiting for late/imaginary buses and drinking wine, we managed to see some incredible archaeological sites. This post tries to dig a bit deeper into the computational archaeology work done in the larger two of these sites, namely Pompeii and the Roman Forum (including the Colosseum).

Pompeii was an ancient Roman town located in the west of Italy near Mount Vesuvius. The town was subject to common tremours, but was damaged significantly during an earthquake in AD 62. The citizens were repairing the damaged town when Mount Vesuvius, the nearby volcano, erupted in AD 79, killing the inhabitants and leaving the town in the state that popularised it as a touristic and archaelogical site upon rediscovery.

Photo from my visit – Homes and Vesuvius in the background

Visiting Pompeii has been in my wishlist for a long time and it is a place that I would like to visit again. This incredible archaeological site was discovered in 1748 and it is so large that it is still being excavated. It contains homes, roads, an amphitheater, water systems, a Gymnasium, etc. Some of the mosaics and frescoes decorating the buildings have been well preserved. Additionally, due to the unique layer of ash created by the lava covering Pompeii, the famous casts of the human remains of Pompeians can be created using a resin. This is possible because the lava solidified over the body and as the body decomposed, a void was created between the layer of ash and the remaining human bones. A transparent resin is then injected into this void, creating a cast.

Pompeii is one of the sites that I have mentioned in this blog before as technology has often been used to analyse and present it. Here is some of the computational archaeology work that has been done for Pompeii:

The Roman Forum and the Colosseum

The Roman Forum refers to a set of Roman Ruins in the center of Rome which includes a large number of structures ranging from government buildings to temples. This is located near the Colosseum and was the center of life in ancient Rome. The Forum was abandoned following the fall of the western Roman empire and was slowly despoiled.

The Roman Forum contains a senate house, government offices, royal residences, tribunals, temples, memorials, statues, etc. This too is quite a large site. considering that it is in the middle of a modern city.

Roman Forum during my visit

Here is some of the computational archaeology work that has been done for the Roman Forum and Colosseum:

Colosseum during my visit

That’s all for now. If you have not yet had a chance to visit these incredible sites, I hope that these 3D models and virtual tours can give you a glimpse into the ancient Roman towns. Of course, I also wish that one day you can experience them yourself too.

Posted by kristina.georgieva on June 10, 2017 in Interesting Articles

As you may have realised, Berlin has kept me quite busy. Now there is some catching up on blogging to do, so here is your dose of computational archaeology.

Here’s a photo (strategically at the history slide) from the Women Who Code meetup.